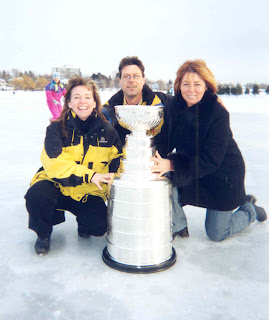 Through the project, the NHL has pledged to restore at least one million gallons of water to Oregon's Deschutes River, replenishing an important resource in a critically dewatered ecosystem.  Total water used throughout Rogers Arena and TD Garden, from the faucets to the ice surface, will be tracked and its equivalent restored through Bonneville Environmental Foundation's Water Restoration Certificates™.

"This is a monumental statement on the part of the NHL, its fans, teams, and players," says Todd Reeve, Vice President of Watershed Programs at the Bonneville Environmental Foundation.  "This commitment to match water used on the ice and in the arena with an equal amount restored to a critically dewatered river represents a cutting edge commitment to sustainability."

The portion of the river that runs between the City of Bend and Lake Billy Chinook is known as the Middle Deschutes River. It is a scenic gem with the potential to support world-class recreation and functioning aquatic ecosystems.  However, water rights holders, individuals who in addition to property ownership possess a legal right to remove river water for "beneficial economic use", divert most of the river's water at Bend.  These disruptions of stream flow have degraded habitats, resulting in poor water quality and a decline in the overall health of the river.  The NHL Water Restoration Project will help return the Middle Deschutes to the vibrant watercourse it once was.

Water not only is essential to the planet, but it's key to business -- especially when your business is hockey.  Many NHL players learned to play the game on outdoor ponds.  NHL Green is committed to keeping those bodies of water available for the next generation of hockey stars.  As droughts, water rationing and water pollution become more prevalent, water stewardship is developing into a top priority among the League's sustainability plans.

Historically, water rights holders have had to adhere to policies that foster a "use it or lose it" model for water use, resulting in waste, overconsumption and the deterioration of watercourses.  New, progressive water laws now consider water left in rivers and streams to be a "beneficial use", meaning water may be restored to rivers and streams without forfeiting the landowner's water rights.

The NHL Water Restoration Project provides financial support for BEF in its collaboration with the Deschutes River Conservancy, the organization facilitating negotiations with local water rights holders and managing construction of stream flow restoration projects in the Deschutes basin. The State of Oregon assures compliance by both parties.

Standards and criteria for the program have been certified by the National Fish and Wildlife Foundation to ensure water is returned in ways that provide the greatest environmental benefit to rivers, streams and fish and wildlife populations.  The League's purchase of each WRC is officially recorded and available for view online through Markit Environmental Registry.

The National Hockey League partnered with Bonneville Environmental Foundation for the 2011 NHL Winter Classic and 2011 NHL All-Star Game, purchasing 426 Renewable Energy Certificates to support the reduction of greenhouse gas emissions and the development of new renewable energy facilities.  In 2009 and 2010, BEF was recognized by the United States Environmental Protection Agency, the United States Department of Energy and the Center for Resource Solutions as Green Power Supplier of the Year.
Posted by Mark Butkus at 7:52 PM

My alternative form of transit is...